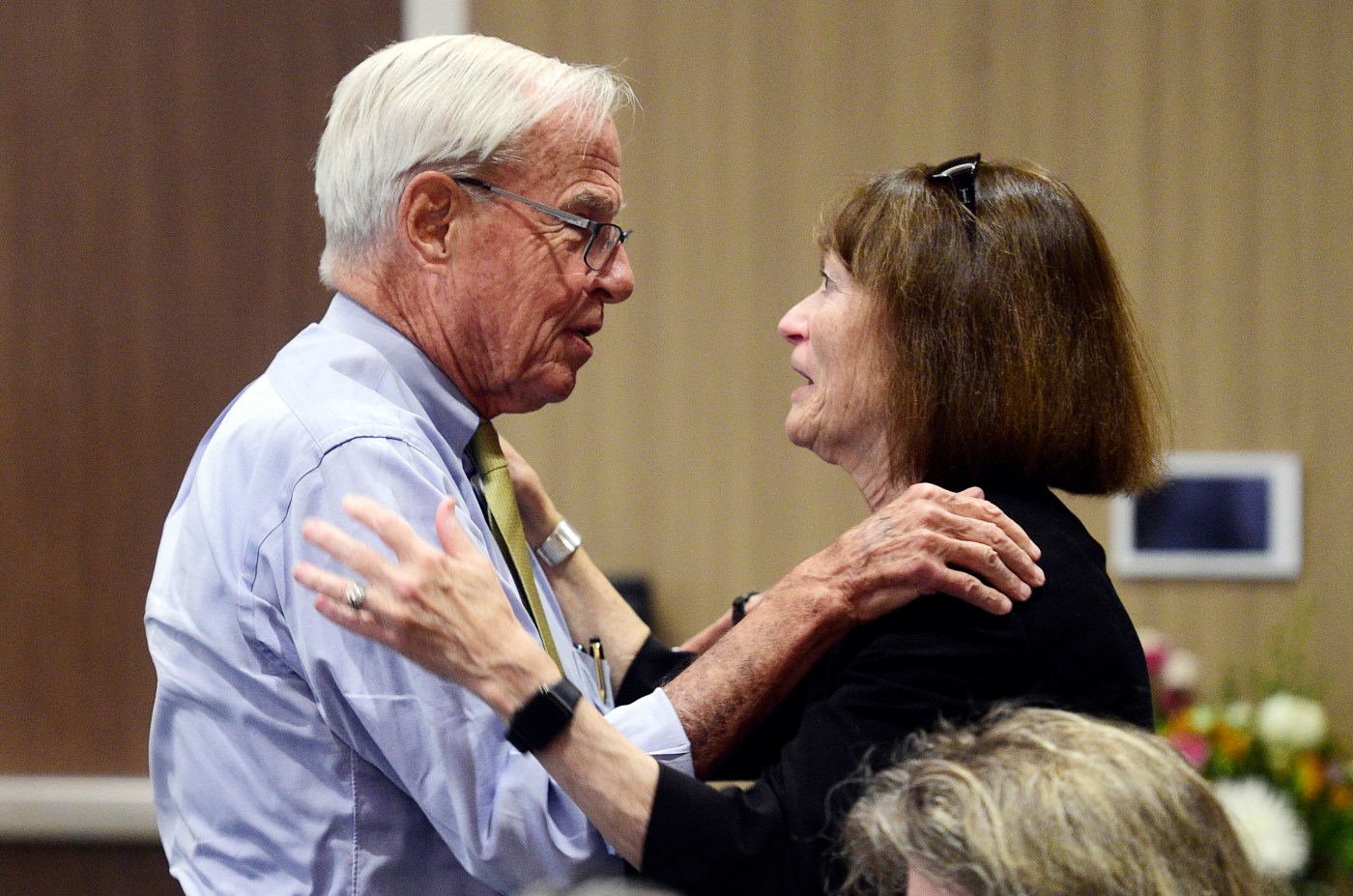 The University of Colorado system Board of Regents met again Friday morning at the Boulder campus to pass the operating budget, elect a new chair and vice chair, and vote on sending a letter on freedom of speech to each incoming freshman.

The board also recognized the work of outgoing President Bruce Benson, who was honored as a president emeritus.

All of the regents, chancellors and some staff members expressed their appreciation for both Benson and his wife, Marcy Benson.

“I think you will go down in history as one of the greatest university presidents in the country, not just the state,” said Regent John Carson, R-Aurora.

Benson said CU president is not a one-person job, and that the administration of the CU system, as well as campus  chancellors, is “the best damn team I’ve ever seen in my life.”

“I just want to say thank you to all of you,” he said. “If the university’s better, it’s because of all of us.”

The overall budget includes a $1.6 billion operating budget, a $1.1 billion restricted funds budget and a $2 billion auxiliary budget. The operating budget uses tuition and state funds to pay for faculty, administration and scholarships, among other things; restricted funds from gifts and research grants go toward specific research, scholarships and facility improvements; and auxiliary funds come from athletics, parking, housing and more.

The University of Colorado Boulder has a $1.9 billion budget, with the majority of revenue coming from tuition, particularly non-resident tuition. State funding accounts for only 10% of revenues.

According to CU system data, CU Boulder’s budget growth has been $59 million, which is slightly above inflation rates due to an increase in indirect cost recovery funds from research funding and a $0.7 million stabilization plan the university has instituted to serve as a safety net in an economic downturn.

Regent Vice Chair Jack Kroll, D-Denver, asked what would happen if federal research funding also dried up during an economic downturn, or for other reasons, as it is a large piece of the budget for both Boulder and the University of Colorado Anschutz Medical Campus.

CU Anschutz Chancellor Don Elliman said he thinks the chances of federal funding drying up are “pretty slim,” in part because there is wide congressional support as most legislators have a medical research university in their districts or state.

However, he said U.S. President Donald Trump previously proposed a 10% cut to indirect cost recovery funding, which would have halted medical research in the country.

“Is it a threat?” he said. “I suppose it is, but that would be for every academic medical center.”

The board also passed two resolutions on civics and freedom of speech.

“Our shared commitment to freedom of expression means we do not confine expression to free speech zones that shield individuals from perspectives different from their own. We fundamentally believe more communication and a greater exchange of ideas between people of diverse backgrounds makes our constitutional republic stronger,” the final version of the letter reads. “The University is a marketplace of ideas, and you will most benefit from your time here as an active participant.”

Hill, who added it was a bipartisan effort, said, “Each and every paragraph in this one page, nonpartisan letter is firmly grounded in and tethered to things already in regent policy.”

While she supported the letter, Shoemaker, who attended the meeting late, also took the opportunity to criticize Hill’s public Facebook post in late April, which she called “infamous.”

He later told the Daily Camera his post was misconstrued, and he was referring to only to those who “engaged in ugly behavior” at the open forums at which Kennedy spoke to the university communities, and not all Kennedy opponents.

Shoemaker called the post “hate speech” that came close to the line of inciting violence.

“In conclusion, Chance, I believe that although your Facebook post was free speech, it was insulting and it was threatening to individuals on the Boulder campus and to me personally. I also think it was beneath the dignity of this Board of Regents,” she said. “I hope in the future you’ll be willing to apologize to me and the students.”

Hill did not apologize at the meeting, but rather said he respects Shoemaker’s right to her opinion but disagrees with her characterization of the post.

Regent Lesley Smith, D-at large, voted to approve the letter, although she said she isn’t sure it is necessary. She worries students won’t actually read it, she said.

She also asked for the board to move on to other issues after spending time on freedom of expression.

“I will say, though, a lot of energy and time has been spent on freedom of expression … I do ask that you give us some space for some of these issues that we brought forward today,” she said, which included requests to consider sustainability and LGBTQ issues at committees. “We’ve got this letter, we’ve got the policy, we can continue to work hard on this issue, but let’s set aside some time for other issues, because we are a board of nine.”

Regents also approved a proposal from the University of Colorado Colorado Springs for civics education, which contains seven components and will ultimately cost just under $500,000 annually. The proposal passed 6-3, with Shoemaker, Smith and Regent Irene Griego, D-Lakewood, opposed.

UCCS Provost Tom Christensen presented the components, which include certificates and minors; a program on the American Constitution; geocivics instruction; a unit on intellectual property in American civics; and online civics education. While Christensen said the certificates programs will move forward no matter what, there is no funding for the other aspects of the proposal.

The price tag associated with the proposed program on the American Constitution, about $400,000, deterred some regents from approving the proposal. The program will include a postdoctoral fellowship, speakers, an experience in Washington, D.C., and professional development, among other things.

Todd Saliman, chief financial officer of the system, said he did not yet know where the money for the program would come from, but the administration will figure it out and will probably devise a plan once all of the campuses get their proposals passed.

Griego pointed out that regents will need to be prepared to produce up to $500 million for each campus because of this proposal, without expecting to dictate the curriculum, which she said she is worried about. The University Affairs Committee asked that the three other campuses rework their proposals because it didn’t approve of some of the courses.

“I’m going to be really curious to see where Todd finds the money” for all four, Griego said.

While an amendment was proposed to split the program from the other pieces, it failed along party lines, 5-4.

Regent Heidi Ganahl, R-at large, abstained from the vote for chair of the board, giving a quote from Theodore Roosevelt as the only explanation: “Knowing what’s right doesn’t mean much unless you do what’s right.”

She did not want to elaborate further.

Gallegos said he hopes to guide and lead the board to work together.

“I want to thank you for your confidence and hope that somewhere along the line you don’t get buyer’s remorse,” he said.

Griego said, “It’s important that all of our voices are heard and I will support the board in whatever way I can to ensure that we hear all our voices.”

Outgoing chair Sue Sharkey, R-Castle Rock, said it has been a privilege to serve as chair for two years.

“Sometimes we don’t get along, and sometimes we argue or disagree, and it seems like that’s what makes the news. Of all the great things that we do, I wish that that would occasionally be recognized and noticed,” she said. “Our divided votes don’t happen that often.”