Twin peaks seem to be making a comeback.

ChainLink [LINK] and Binance Coin [BNB] are the two top cryptocurrencies in the market, with respect to year to date price appreciation among larger-cap assets. Bitcoin, amassing over 60 percent of the collective market, is only fit for the fourth position, despite a 200 percent plus price gain.

According to data from Messari’s OnChainFX, LINK, with a ‘Liquid Marketcap’ of just $2.29 billion or just about 1 percent of Bitcoin’s market cap, recorded a price surge of 1105.9 percent. During the turn of 2018, the coin’s price was $0.29 and at its 2019 peak, the price jumped to as high as $4.45. At press time, the price recorded a correction of 20.3 percent and was trading at $3.53. In the larger context however, this is a mild correction.

The latest catalysts for the now 16th largest cryptocurrency in the market was its addition to Coinbase Pro, the United States’ top cryptocurrency exchange. Late last month, the exchange confirmed that LINK would be listed in two trading pairs, with Bitcoin [LINK/BTC] and Ethereum [ETH/LINK], and will be available in all its markets, barring New York. 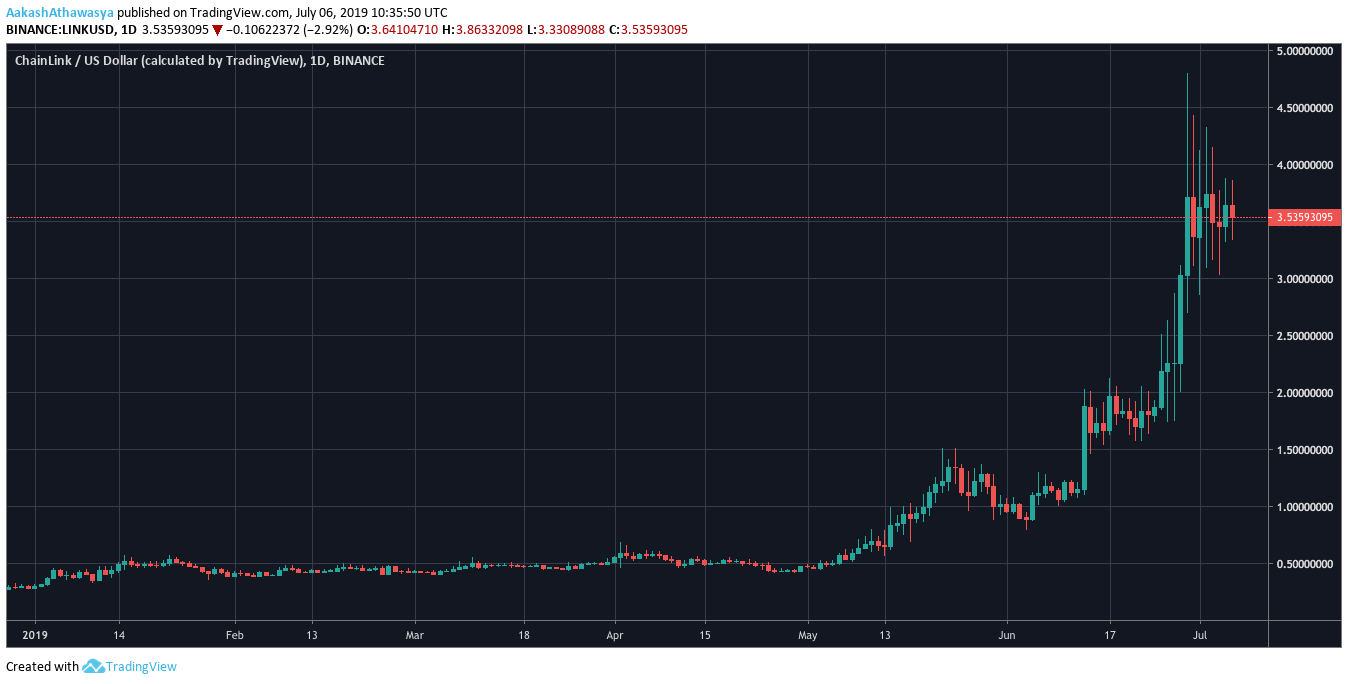 Binance Coin, the native token of Binance, the most popular cryptocurrency exchange in the world, took the second spot but, trailed by a significant margin. No other crypto can match the four-digit price gain of LINK, but BNB made a valiant effort in 2019, with a 457.1 percent gain, breaking its all-time-high on April 19.

Following a slew of developments coming out of Binance, bulls rushed towards the BNB market. From a decentralized exchange to their own blockchain, a token sale platform and now even a native stablecoin, Binance has been traversing through every field of the digital assets industry, taking its native coin with it.

Although not as steep, BNB began the year at just under $6 and by June 22, reached its yearly high of $39.27. Since then, a mild correction spree has brought the coin’s price down to $33.1. However, the overall trend is still green.

Nudged between BNB and BTC is Litecoin [LTC], the silver to Bitcoin’s gold. With the LTC halving scheduled for next month, the price has been on an upward swing since the beginning of the year, appreciating by 292 percent. At press time, it was trading at under $120.