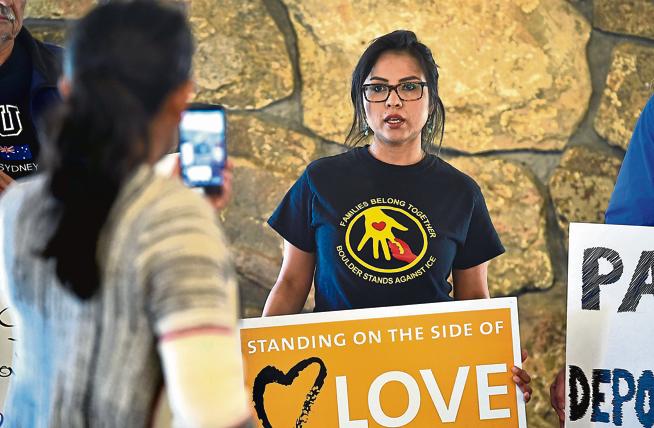 An immigrant who has sought sanctuary in Boulder on Monday received a letter from Immigration and Customs Enforcement notifying her of a nearly $5,000 fine because she has not left the country.

Ingrid Encalada Latorre said the letter — addressed to her at her place of refuge at the Unitarian Universalist Church of Boulder — scared her. She later realized others faced exponentially greater fines, which scared her more, she said. One of her North Carolina friends received a letter threatening a $453,000 fine.

“How are we going to pay that?” she said. “They just want to make a panic.”

The Trump administration threatened to impose these fines on immigrants who seek sanctuary in locations where ICE does not conduct enforcement operations, such as churches. Although the penalties are not new, imposing the financial penalties has been rare, according to reporting by the Washington Post.

ICE is targeting immigrants with fines of up to $799 a day if they have outstanding deportation orders or fines that total up to $4,792 if they agreed to leave the United States but then did not, the newspaper reported.

In response to questions about the fine, Alethea Smock, an ICE spokeswoman, emailed a list of government regulations that allow the agency to fine immigrants who do not comply with deportation orders, according to the Denver Post.

A placard in one of the front windows of the Unitarian Universalist Church displays a reminder that law enforcement cannot enter the building without a warrant. Church leadership did not immediately respond to request for comment.

Various Denver-area groups decried the fines and the effects they have on local families, including the Colorado Immigrant Rights Coalition.

“Our communities see ICE as acting as a political army to terrorize immigrants and the religious communities that have stood up for them and their rights,” the coalition’s statement said, in part. “We stand with our communities opposed to laws that penalize immigrants who are already facing the brunt of President Trump’s anti-immigrant agenda. ICE is clearly choosing to implement these policies in a manner that attempts to intimidate activists and silence people of conscience.”

Jennifer Piper, the interfaith organizing director of the American Friends Service Committee, called on people of faith or conscience to take action. In an interview, she said the notice of fines marked an apparent escalation by the Trump administration, and she described the fines as absurd, in part because they appear to have no benefit.

“What is the benefit to complying with this fine?” she said. “It doesn’t appear there is one.”

Rather, she said, she feels the effort demonstrates how the Trump administration is using its resources to comb through the immigration code to find ways to hurt people who want to stay in this country and be with their families.

“All of these efforts by the administration are really meant to dehumanize, to criminalize and to strike fear into the hearts of immigrant community members,” she said.

Latorre, a mother of two, described the threat of deportation as inhumane, and the fine only more so, especially because it does not appear she will not be granted a work permit or residency in paying it. She doesn’t know what will happen next, she said, or whether she’ll just be asked to pay more.

“What they’re doing — this administration — is not fair,” she said.

However, she said she feels strong and has kept busy by launching a grassroots campaign called “No Mas Chuecos,” designed to educate people about how to follow legal processes to obtain employment and decrease risks of criminalization and deportation, as well as to educate people about the consequences of using false documents both for themselves and for their fellow community members.

The campaign has three primary goals, according to its website: promote immigration and judicial reform, strengthen understanding of the hardships and barrier migrants face when they seek employment, and provide resources on filing taxes, obtaining a Colorado driver’s license and working against identity fraud.

Piper lauded Latorre’s leadership and efforts to educate her community and to shape public policy in addition to fighting her own case.

“She’s really putting in time to try to create dialogue and to try to bring people together,” Piper said.

The Denver Post’s Saja Hindi contributed to this report.