Last week Bitcoin pioneer Barry Silbert decided it was appropriate to rip the Bitcoin vs Gold Scab off one more time. It was just as entertaining as one can imagine. See the Tweet by Barry Silbert below. 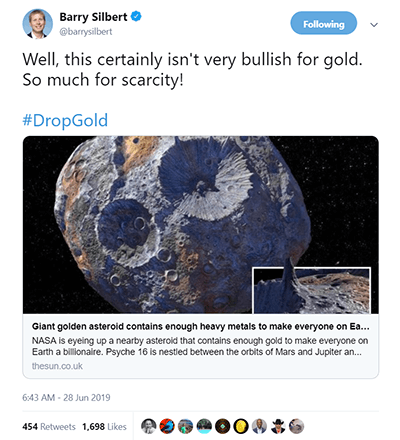 The Tweet Storm That Followed was One for the Books!

The responses to Barry’s Tweets were epic but I want to point out a few that I think did the best job. My friend and former client Peter Spina of GoldSeek went straight for the jugular. You can follow the whole line of responses here. Peter Schiff also showed up for the drama!

I know very well where Peter Spina stands on Crypto. He is a huge fan and he also owns many of the same projects that I do. Attacking gold makes no sense in my opinion. Peter Spina is a pretty tolerant guy but when you say something that does not make sense he is going to let you know. 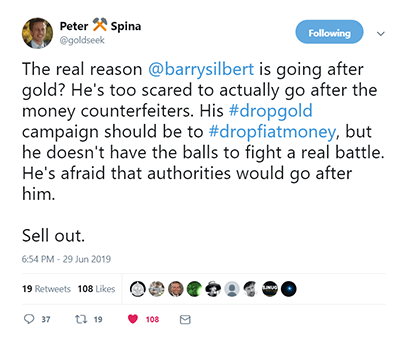 Peter Schiff is a Perpetual Bear Who Shows Up Anytime Bitcoin Surges.

I have been trolling Peter Schiff on his Facebook page for years. Sure I owe him part of my financial awakening. I read his book, “Crash Proof: How to Profit From the Coming Economic Collapse” back in 2007 and my family did very well in the Silver bull run from 2008-2011.

On the other hand, I have grown weary of his incessant attacks on Bitcoin. The guy is like a record player that is stuck repeating the same song over and over and over again. I believe his energy is misplaced.

“Bitcoin and Friends”, Has Challenged Peter Schiff to a Debate.

Yes, a cartoon Bitcoin has challenged Peter Schiff to a debate. This is how things get done in the new world. We are in a world of memes and it is time Peter Schiff shows up to this century.

Why Can’t We All Just Get Along?

As for me and my house, we will own both Bitcoin and Gold. Even though every now knows me as a crypto enthusiast my journey down the road of liberty began with gold and particularly silver. At an early age, my Father taught me the value of precious metals. When my friends were receiving toys for Christmas I also received silver coins.

Real money is something I value highly. Bitcoin and Gold, in my opinion, are almost equal. I just lean more to Bitcoin today. There is just something about it being convenient and easily divisible that make it amazing.

I wish we could put the subject to rest but I understand it will rear its ugly head daily for years to come. Be smart, why not own a little of both?