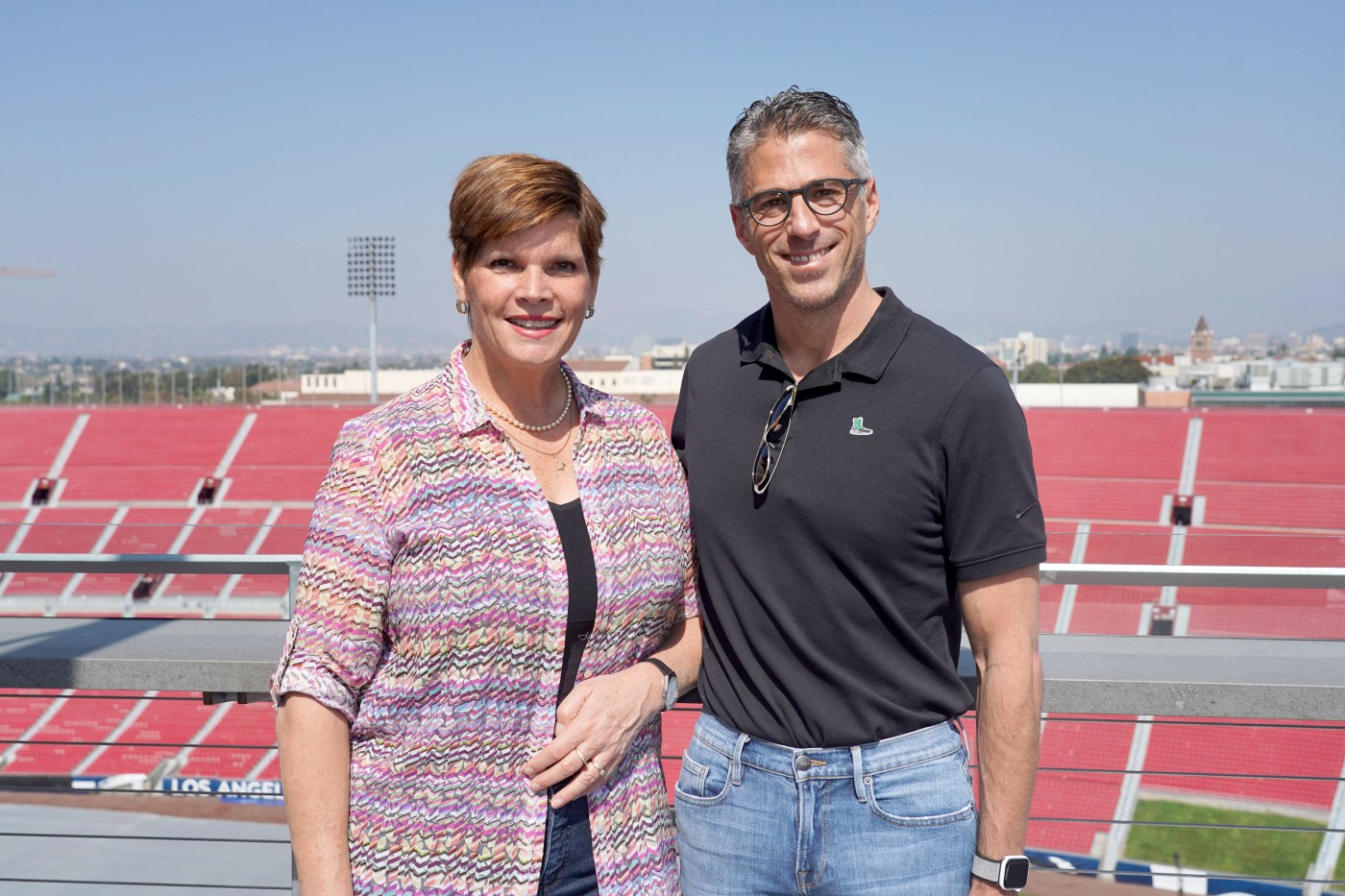 LOS ANGELES >> There were no public pools on her native Aruba, the small Caribbean Island that is part of kingdom of the Netherlands.

So Nicole Hoevertsz and her synchronized swimming partner, Esther Croes, trained for the 1984 Olympic Games in at a local Holiday Inn. When they outgrew the hotel pool, they relocated to Visalia, in the San Joaquin Valley, training at a high school and creating quite a buzz with the community.

“We were local celebrities,” Hoevertsz said laughing at the memory.

For a send off to the 1984 Games, Hoevertsz and Croes rode atop a fire truck in the town’s Fourth of July parade.

Hoevertsz was the guest of honor in another parade through the streets of California Wednesday.

Hoevertsz, chair of the International Olympic Committee’s coordination commission for the 2028 Games, toured many of the venues for Los Angeles’ third Olympics for the first time.

Hoevertsz, 55, will be the IOC’s point person for the next nine years, the official charged with making sure LA 2028, the local organizing committee, stays on budget and on schedule, a major player in what she describes as the IOC and Los Angeles co-creation of the Games.

“We’re going to adapt to the city,” she said. “Instead of the city adapting to the Games.”

Hoevertsz was filled with emotion as she visited into the Coliseum for the first time since walking in the Opening Ceremony for the 1984 Games as part of the Netherland Antilles delegation. Hoevertsz and an IOC delegation visited Staples Center and LA Live, Long Beach, the USC campus and several of the Olympic parks stretch across Los Angeles and Orange counties, each stop bringing alive venues and plans she had only previously viewed in bid books.

“Very beautiful to see today all the LA organizing committee had told us to actually see for our own eyes and it’s amazing,” Hoevertsz said during an interview on the UCLA campus. “It’s really impressive. …The beautiful thing is the Games are not going to change the city. We’re coming in a very fascinating city that creates opportunities and the Games are going to be part of the city and we’re going to use all the benefits the city already has. That is going to be beautiful and will leave a great human legacy.”

Los Angeles offers a stark contrast to two other host cities, Hoevertsz, an attorney and IOC executive board member, has served on coordination commissions for—Rio de Janeiro and Tokyo.

Unlike most other host cities, Rio in particular, Los Angeles comes with a surplus of existing or previously approved world class venues and infrastructure projects. Four of the last five Summer Olympics have reported deficits or broke even largely because of construction costs. The 2004 Games left Athens with a $14.5 million deficit and city full of white elephant venues. Rio’s deficit is $2 billion and expected to grow. The venues that accounted for much of Rio’s $13.2 billion budget are in a state of disrepair just three years after the Games.

Tokyo’s budget has climbed to $25 billion, roughly four times the original projection, according to a Japanese government study.

Without major construction costs, LA 2028 has a balanced $6.9 billion budget for the privately financed Games. It is the lowest operating budget for an Olympics since Turin put on the 2006 Winter Games for $700 million, and the lowest for a Summer Games since the 1996 Olympics in Atlanta came with a $1.7 billion price tag.

“What makes LA is so unique is that there’s no construction necessary,” she said. “That’s always one of the biggest headaches of the host city. Now the construction is done. You have all the venues. That was unique.”

LA 2028’s budget projects $2.5 billion in domestic sponsorships, a projection some analysts have characterized as cautious.

The IOC, Hoevertsz said is “Very confident” in LA 2028 and the USOPC’s ability to sell the Games. “We are very optimistic about the whole project and we are very confident that they will make it happen,” she said.

The fallout from a series of sexual abuse scandals that have plagued the USOPC, USA Gymnastics, USA Swimming and other national governing bodies in recent years and caught the attention of Congress and federal investigators could present an obstacle with potential sponsors. USA Gymnastics lost major sponsors such as AT&T, Procter & Gamble, Kellogg’s, Hershey’s and Under Armour in the wake of the Larry Nassar scandal.

“The IOC was of course is always very worried about the health and benefit and safety of the athletes,” Hoevertsz said. “It’s something we have to stand for and we are very happy with changes and the new policies that have been introduced at the level of the USOPC. We are very confident in the leadership of the USOPC and they have made great changes and we are supportive of those changes. Women and girls and boys and men have to be protected. The athletes have to be confident that they can perform in a safe environment and that is exactly what’s going to happen. So I hope the sponsors can see the changes that has happened at the USOPC level and we hope that this will not have any effect on the commercial side.”

Hoevertsz is considered a rising star in IOC circles, receiving high marks for leading an IOC commission that facilitated the participation of Russian athletes as unaffiliated competitors in the 2018 Winter Olympics in South Korea.

As a member of the IOC legal affairs commission, she is expected to play a leading role in the debate over whether Russia will be allowed to participate in Tokyo amid continued concerns about state supported doping and the IOC’s handling of the Caster Semenya case.

“It’s not so much what I think it’s what the IOC feels that is the best thing to do,” Hoevertsz said. “It’s a very difficult topic. A very controversial, very delicate topic that we still have to look forward to. I think we’ve moved forward a lot with (World Anti-Doping Agency), with the IOC working together and making sure the right decisions are made.”

Does she expect to see athletes competing under the Russia flag in Tokyo?

“We’ll have to see, we’ll have to see. It’s more up to WADA, that has to make the correct steps and the international federations are also taking steps.”

Semenya, the Olympic 800-meter champion from South Africa, was barred from competition earlier this year by the IAAF, track and field’s worldwide governing body, for having high levels of naturally produced testosterone. The IAAF said Semenya and other female athletes in the 400 and certain middle distance events with the same condition can only return to competition after undergoing hormone therapy for six months.

“The Semenya case is also very delicate topic,” Hoevertsz said. “The fact that the Semenya is on the table is because we have to protect the female athletes in general. We have rules to comply with. The rules have to apply in general to everybody and we have to make sure that we protect the athletes to participate in the Olympic Games with those rules. When we have cases like the Semenya case. we listen to the medical commission, we listen to all the experts, we listen to the athletes commission, we listen the legal affairs. All these points of view have to be brought together and we have to make a decision that is the best for the interests of everybody involved.”