Lafayette police looking into unsubstantiated threats in ‘an abundance of caution’ 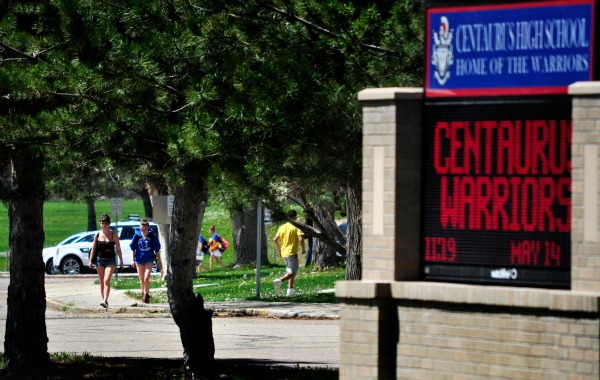 Lafayette police responded to Centaurs High School in an “abundance of caution” to investigate reports of threats to the school, but determined the reports were unfounded.

Lafayette police Deputy Chief Brian Rosipajla confirmed officers were at the school, 10300 W South Boulder Road, but said they were only investigating and there were no lockouts or lockdowns at the school.

The Lafayette Police Department has received a report of threats made at Centaurus High School. We have responded to the school with an abundance of caution and are investigating the report.

Police then sent out an alert later saying police had interviewed witnesses and determined the reports were “unfounded” and there was “no credible threat” to the school. Officers will remain on scene through the day as a precaution.

In an email to parents, Centaurus Principal Daniel Ryan said it appears most of the information appeared to be spreading by rumor via social media.

“I want to let everyone know that we are aware that rumors have been circulating among the student body today regarding a possible threat to our school,” Ryan wrote. “I want to start by sharing that at this time we are unaware of any actual credible threat to the school.

“A group of students let our administrators know about rumors that someone had overheard a threat made by an unknown individual. We have been working closely with our School Resource Officer to investigate.  Again, at this time, there is no evidence of an actual threat to the school.”

Ryan wrote that none of the students at this time have been able to locate the post containing the supposed threat.

In the letter, Ryan urged those with information to contact the school rather than posting on social media.

Centaurus High School has been investigating what appears to be an unsubstantiated rumor of a threat to the school. There is no evidence of a threat.

Instead of sharing information socially — if you have a concern report it to the school, BVSD Security or police, immediately.

“We are aware that these rumors have been posted on social media in the community, perpetuating information that is not accurate and causing an elevated level of concern,” Ryan wrote. “Instead of sharing information socially, we ask that anyone with a concern report it to a school administrator, BVSD Security or law enforcement, immediately.”

People with concerns about school safety can submit tips through Colorado’s Safe2Tell hotline at safe2tell.org.