‘Like Godzilla over my house’: Residents recount terrifying moments as Oak fire rages 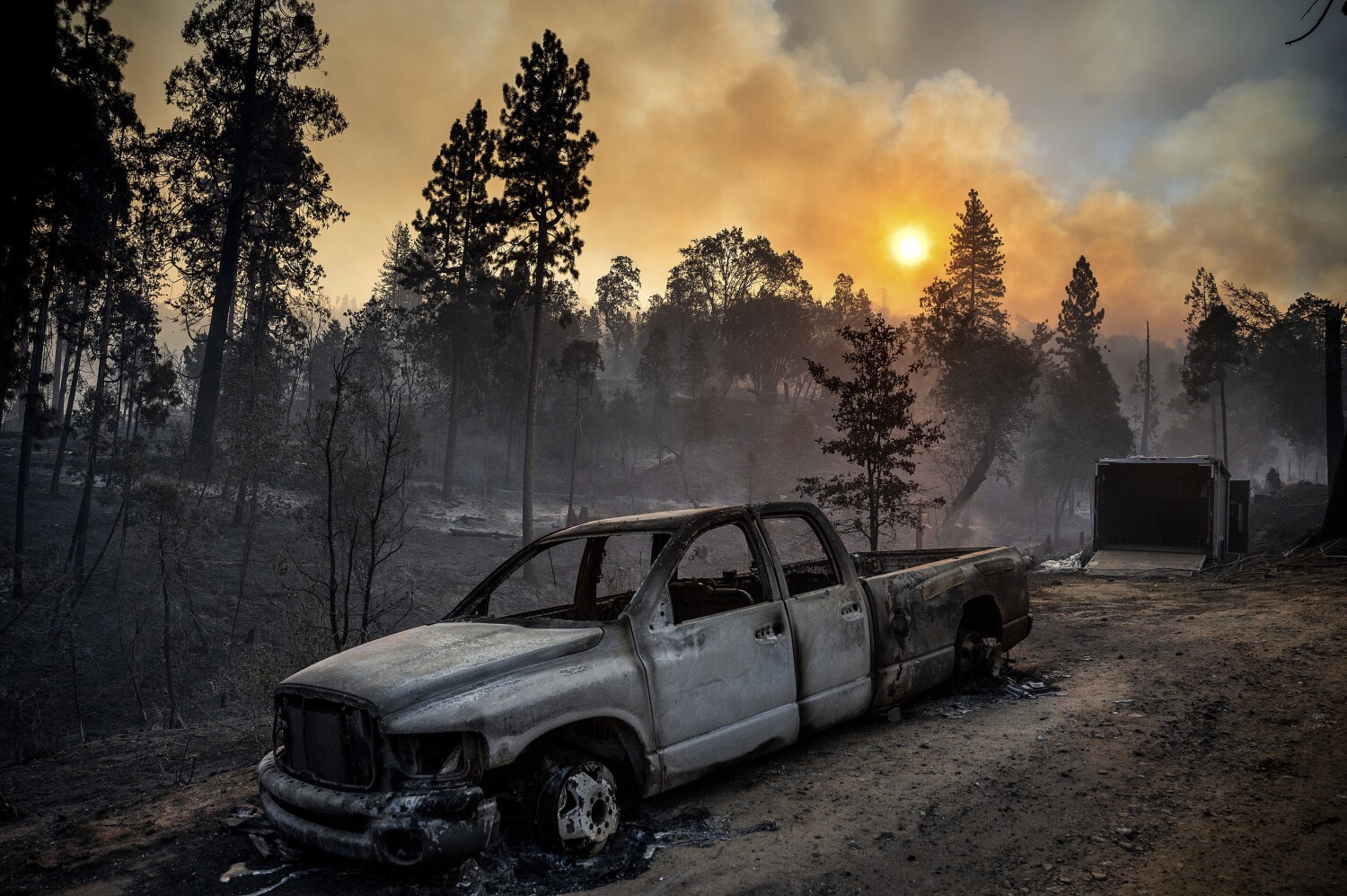 The Oak fire near Yosemite is the biggest blaze in California this year and has forced thousands to flee their homes.

Several mountain communities are under threat. The fire has destroyed seven structures and is threatening thousands of others, according to the California Department of Forestry and Fire Protection.

On Sunday, the fire agency estimated that 10 structures had been destroyed, but teams surveying the wildfire damage downgraded that number on Monday.

The fire started Friday near Midpines and had grown to more than 16,700 acres with 10% containment by early Monday.

Here is what it’s like to live in the path of the fire, based on interviews with residents:

Sitting in her front yard Sunday morning while ash rained down on her, Beth Pratt was thankful that things weren’t worse.

Less than a mile from the evacuation zone in Midpines, Pratt had packed up her car Saturday, ready to leave.

“The fire blew up,” said Pratt, 53, who is the California regional executive director for the National Wildlife Federation. “It looked like Godzilla over my house.”

But then firefighting jets began to arrive, dumping retardant and tamping down the flames near her. Pratt cheered them from the ground.

“Here I am in the middle of nowhere outside Yosemite,” she said. “But I feel like I’ve been under LAX the last couple of days.”

In the 25 years she’s lived in Midpines, Pratt has had to evacuate three times because of wildfires.

But she said the Oak fire has been the scariest because it’s so large and fast-moving. She’s been without power in the sweltering temperatures, hauling up water for herself, her five dogs, two cats and a lizard.

Pratt is planning to stay until there’s an evacuation order because leaving is stressful on her animals — but also because once you leave, it’s hard to get back.

“I’m still not out of the woods,” Pratt said.

“The wind is blowing the fire away from me. But that means it’s blowing it to someone else, which doesn’t make you feel good.”

‘A price you pay for having paradise’

Aubrey Brown and his wife, Lynda, have been at a Red Cross center since Friday, when they rushed from their home in the Lushmeadows community.

Brown was working in his garage when he noticed the sky turning orange. He came outside to see a giant smoke plume encircling their house.

The couple, both 70, moved to the area a year and a half ago from the Bay Area, enticed by a countryside that reminded them of their youth in more rural areas.

They bought a 2-acre property with a custom home that features a glass wall looking out over the mountains. They understood they were buying into an area prone to fire.

“We bought with our eyes wide open,” Lynda Brown said. “There’s a price you pay for having paradise these days.”

Just last week, having recently completed a wildfire preparedness class, the Browns created evacuation kits with all of their important paperwork, mementos and medical prescriptions.

In the evacuation center, they’ve heard that their home is likely still standing, and they’re now waiting for more information about their daughter’s property in nearby Bootjack.

“We can’t worry about what we have no control over,” Lynda Brown said. “We’re just going to put our minds to things we can help with around here.”

‘Been through this for half my life, baby’

Keisha McGruder, manager of the Bootjack Market & Deli just off Highway 49, said the plumes of smoke coming off the raging Oak fire are so thick they’re blowing into her store.

Positioned about a quarter-mile from the blaze, McGruder said she’s staying open in spite of the conditions to make sure people get food and supplies they need to either hunker down or flee.

That group includes the crew of firefighters and emergency personnel for whom McGruder is offering free coffee and soft drinks while they use her parking lot as a makeshift meeting place.

“We couldn’t even open the store yesterday. We had roads closed all the way to Highway 49 south. … It was basically in our backyard,” said McGruder, who has lived in the area for more than three decades.

While some homes have already burned and evacuation orders are in effect for several communities, McGruder said several people have stayed behind to try to protect their homes from the risk of spot fires caused by embers blowing off the main fire.

Despite the blaze’s rapid growth, McGruder sounded nonplussed as a customer entered the store and waved away smoke.

“Been through this for half my life, baby,” she said.