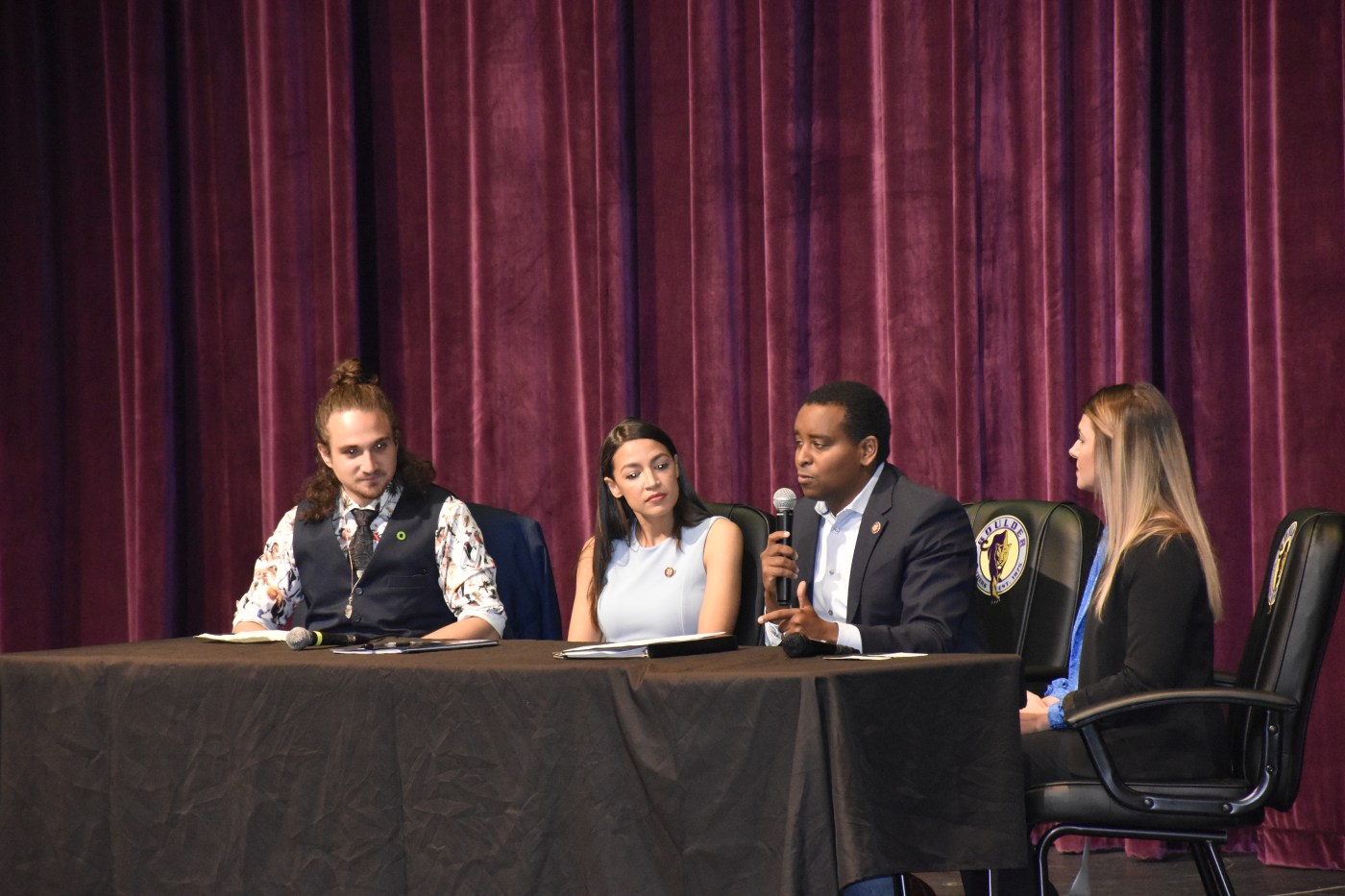 Just seven months ago Mike Jacobs, a sophomore at the University of Colorado Boulder was disheartened that he and a group of student activists working with EarthGuardians were only able to draw 250 people to their climate rally.

However, on Saturday, just one day after helping to successfully rally over 7,000 people to the Denver Climate Strike, Jacobs was invited to join a panel discussion at Boulder High School on climate change with Rep. Joe Neguse, D-Boulder,  N”]and Rep. Alexandria Ocasio-Cortez, D-N.Y.

The line for those hoping to get in to the packed event stretched well down and around the block on Arapahoe Avenue, beforehand.

“(Ocasio-Cortez) grew up only 15 minutes from where I’m from in New York and she’s only five years older than me, yet she introduced the Green New Deal as a freshman in Congress,” Jacobs said. “She’s my hero and to have the top dog validate and recognize everything we’ve been doing and give us a platform to share our ideas meant everything.”

Jacobs was also joined by Tamera Breidenbach, a senior at Colorado State University studying ecosystems science and sustainability who is set to present at the United Nation’s Convention of the Parties on Climate Change in December.

“My generation knows how important it is to address the climate crisis and we’re tired of politicians not listening,” she said. “We are the future, we need leaders who hear us and represent us. Congressman Neguse and Congresswoman Ocasio-Cortez are champions of our future.”

To do so, both Neguse and Ocasio-Cortez encouraged those in the crowd to continue to be involved in the political process and making their voices heard.

“Having 7,500 students organize in Denver and telling the generation before them that this is their obligation will go a long way to changing the way policy is made in Congress” Neguse said. “So keep the heat on.”

While both Neguse and Ocasio-Cortez gave impassioned speeches on their work to mitigate the effects of climate change and how important the youth movement is to effecting the sort of systemic cultural change that is needed to stop, or even slow the environmental damage caused over the last century.

“In many ways, the climate crisis is a product, it’s an externality, of our unsustainable way of life and you don’t fix that with a solar panel,” Ocasio-Cortez said. “You fix it by changing the way we think and operate as a society… we have done it before and we can do it again.”

After their speeches, Neguse and Ocasio-Cortez split their time in front of the crowd with Breidenbach and Jacobs as they answered questions from those in attendance.

“Sometimes I’ll get invited to political events, but it feels like I’m only invited to be tokenized, so they can say ‘hey look we have the support of the youth,’ but they don’t actually give anything back,” Jacobs said. “Joe and Alex showed me that they invited me to show up and share my ideas and that’s a powerful message. It shows other kids that they can make an impact and brings more people into the fight.”

Though the Colorado Sunrise Movement, which organized Saturday’s event, was only founded in February, it now boasts 200 members. Members hope their numbers will balloon following Saturday’s event.

“It made me want to cry. It gave me a glimmer of hope,” Amanda Brown, a senior at CU Boulder“] said. “It makes me want to get more involved and just be more aware of how my day-to-day actions are affecting the climate.”

Taking advantage of the momentum generated by the Climate Strike and Ocasio-Cortez’s visit, the Colorado Sunrise Movement is planning a protest at the Suncor Energy’s corporate head office on 717 17th Street in Denver.

The protest will begin at 5:30 p.m. Thursday and call for Suncor Energy to take accountability for its hazardous practices. Boulder and San Miguel counties joined the city of Boulder in April 2018 in suing ExxonMobil and Suncor Energy, accusing the giant energy corporations of “reckless actions and damages.”

“We have a lot of momentum right now,” said Michele Weindling, an organizer with Colorado Sunrise Movement, “and we’re not going to stop.”