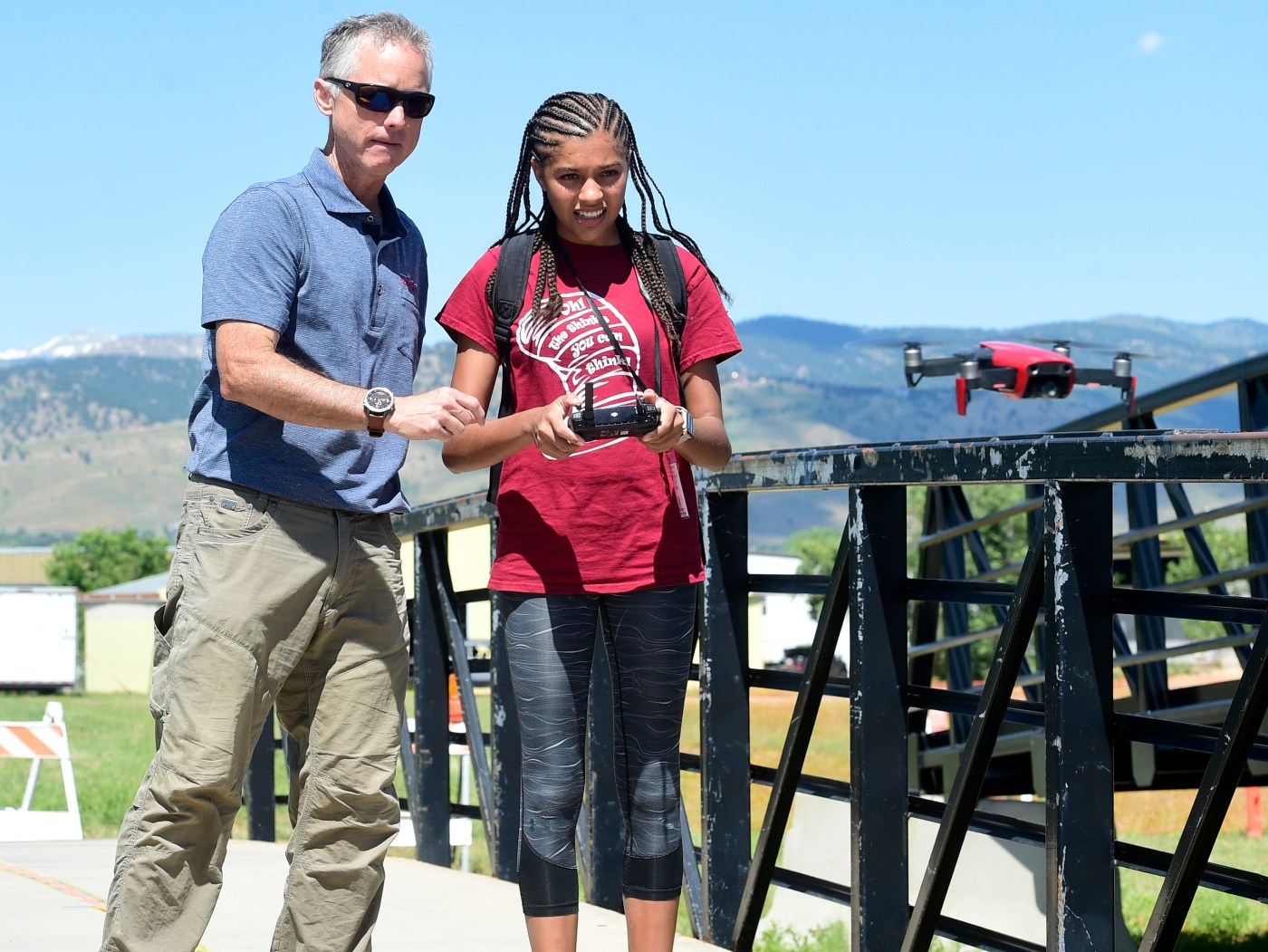 As small, propeller-nosed planes landed on the runway at Boulder Municipal Airport, futures in science, technology, engineering and mathematics were taking flight.

The University of Colorado Boulder’s Science Discovery program partnered with Scientific Aviation and its contractors to introduce a group of high schoolers in the STEM research experience summer program to aviation science and engineering and aviation professionals and scientists were on hand to show 24 teens the ropes of their fields.

“Every time you’re introducing these kids to something they’re not familiar with, you’re not only making an investment into your future, but their future,” said Scott Sieke, a graduate student at CU Boulder who works with Science Discovery. “There are all kinds of challenges these days that people are trying to solve, and we’re done with the easy problems. We’re entering grand challenges that aren’t going to be solved by a person or company, they’re going to be solved by a community.”

The students were divided into three groups and got hands-on experience in three stations, each dedicated to a different branch of aviation.

In the dry midday heat, Stephen Conley, founder of Scientific Aviation, directed students navigating a professional drone course marked by a twisting line spray-painted orange. On initial glance, it seemed to be little more than a fun obstacle course for the teens, but Conley pointed out the equipment andcourse is sought after across the globe. He said companies often will send employees to Scientific Aviation to be certified for drone flying on the same, twisting orange line that 14- to 18-year-olds were struggling to maneuver.

The kids weren’t just using real-world equipment, they were powering through professional training.

“The scale of this is an oil well pad,” Conley said. “The idea of this course is that when you fly to a pump, can you circle it without hitting it? This is the exact flight path you take at a real facility.”

A short walk away, a second group of students in an open hangar were wide eyed and learning about in-flight measurements of greenhouse gases. A handful sat in a circle in front of a red-and-white propeller plane while listening to senior scientist Mackenzie Smith detail how data is extracted.

“I’ve been talking to them about how we get air from outside of the aircraft to inside of the aircraft,” Smith said. “We’ve got these inlets that are sticking out of the bottom of the wing. This is tubing that goes through the wing, into the plane and to the instruments, which gives us our measurements.”

The process is used to measure the amount of greenhouse gases — which ones specifically depends on the project at hand —  within the air in a specified area, such as an oil field or near livestock.

“I think about when I was in high school to go to something like this and great it would have been,” Smith said. “It’s important to show kids what kinds of careers are out there for them in science that are a little less traditional.”

The third station was in modern room within Scientific Aviation’s office. There, Matthew Coggon — a scientist in the Chemical Sciences Division of the National Oceanic and Atmospheric Administration —  talked about research on air pollution and smog. Coggon’s work found human activities contribute to pollution in a number of ways beyond vehicle emissions, such as using hygiene products.

Coggon then sliced open a lemon and lime, placed it in a closed, empty fish tank only accompanied by an ultraviolet light. He then covered up his “Magic Box” — aptly written in magic marker on a piece of cardboard — and waited five minutes. He then shone a green laser pointer, and the beam was visible because of the smog created by the fruit, the light and the oxygen in the tank.

The goal was to show students how easily pollution is created.

“When people think about pollution, it’s an invisible thing,” Coggon said. “It’s important for people to know that what you do on a daily basis, even on a small scale with oranges and limes, can lead to pollution that harms your health. I’m showing them how atmospheric scientists react to this problem and maybe they pursue this in college.”

That potential of pursuit was the driving factor of the day.

“This is our part of trying to get the next generation of scientists,” Conley said, in reference to what he believes is a shortage of kids interested in STEM. “We need to replace ourselves.”