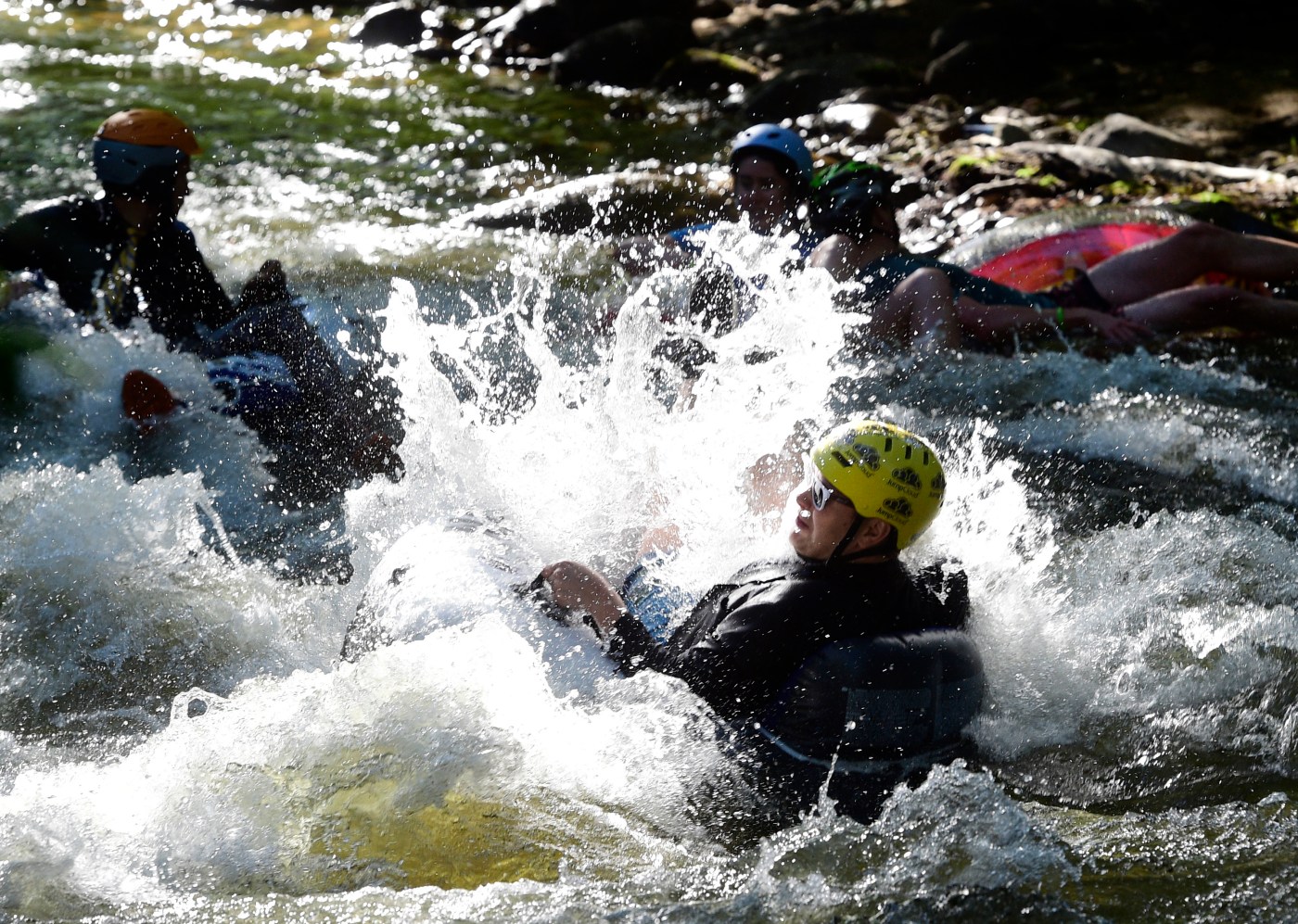 With the rushing sounds of Boulder Creek behind him, Tube to Work Day co-founder Jeff Kagan stood on a stage in Eben G. Fine Park and looked out over his army. Their suits were not of armor, but of pieces three. Their noble steeds were light as air, with rainbow manes. Their numbers in the hundreds, they thrust their oars into the air as Kagan led them into battle.

“They may say this is weird. And impractical. Which it is,” Kagan announced. “But as William Wallace said, ‘They may take our tubes, but they will never take our freedom!’”

And so 1,000 tubers launched from the banks of Boulder Creek on Friday for the 12th edition of Tube To Work Day toward downtown Boulder. Toward freedom.

“It was definitely a good way to get the heart going early in the morning,” said Ian Horne. “You’re flying along. It’s a great time.”

Added his friend Matt Nisbet: “Smiles on everybody’s faces. People from all walks of life, splashing each other.”

What started as Kagan and Andy Gruel tubing by themselves in 2008 has grown into one of Boulder’s signature events. There are now waivers and lines and sponsors and DJs, but at its heart, the event remains what Kagan and Gruel were seeking all those years ago: a celebration of alternative transportation and the unique city where it takes place.

“It’s fun, and it’s Boulder,” said Mayor Suzanne Jones, who was participating in her first Tube To Work Day. “And it’s nice to know we don’t always take ourselves too seriously.”

A mix of nervous newcomers and veteran tubers returning to chase the thrill began gathering in Eben G. Fine Park as early as 6 a.m. Friday.

Adam Lalonde was supposed to join some coworkers from Boulder Community Health for his first time tubing to work, but when work schedules interfered he recruited his son, Skylar.

While the Lalondes were equipped with a standard two-person tube for some father-son bonding time on the water, Brandon Skari purchased a new unicorn tube for his fourth time tubing to work.

“The regular tubes are just so boring,” Skari said. “Everyone has the same one.”

But when asked if his unicorn tube had a moniker, as per Tube to Work Day tradition, Skari put his hands on his helmet, suddenly aware he was going through the rapids on a horse with no name.

“I need to do that!” Skari said. “Any suggestions? This is a lot of pressure.”

While there was an entire herd of unicorn tubes, tuber Chris Ochs had a bull tube. Last year Ochs rode an eagle tube on top of a pizza tube, but had some sad news to share.

“The pizza died,” Ochs said. But je was hoping the bull would prove a worthy successor.

“I tested it in the living room,” Ochs said. “I got it so my butt wouldn’t keep hitting the rocks. Gluteal preservation.”

But once on the water, Ochs found his inflata-bull was just as hard to ride as an actual bull.

“I was just sort of sprawled out across it,” he said. “If you get off center, you are done.”

Ochs was not the only participant facing tube regret: In a fusion of “Only in Boulder” meets “Florida Man,” Alessandro Vecchi held up his tiny tube after climbing out of the water at Central Park.

“Not enough, not enough,” Vecchi said. “I’m from Florida, bro. It’s not the same kind of water.”

‘Nothing more Boulder than this’

At the corner of Broadway and Canyon Boulevard, the party moved from the water to the park, with tubers grabbing free food and coffee as they broke down their commute with a one-man band playing “American Pie” in the background.

“Nothing more Boulder than this,” Avery McEvoy said.

McEvoy, Grace Johnson and Maddy Korbel all took to the creek for their first Tube to Work Day in matching doughnut tubes, and found out the hard way that the doughnut holes mattered.

“You have to lift your butt,” McEvoy said, with Korbel adding next year she needed “Kim Kardashian butt pads.”

“I had a rough beginning,” Korbel said. “And middle. And end.”

Korbel is actually visiting from Los Angeles, and got roped into tubing by McEvoy and Johnson on her first day.

“This is her first daylight in Boulder, and she’s tubing,” McEvoy said of Korbel, who admitted she doesn’t get a lot of water sport practice back home.

“Have you seen the LA river?” she said.

All three said they would do it again, just maybe with different tubes.

“The hanging bacon was a high point,” Johnson said. “It was kind of a surreal moment.”

“Right after the bacon,” McEvoy added. “We just looked at each other and were like, ‘What is this life?’”

While most tubers called it a day after getting out at Central Park, some continued on. Jordan Murphy, Jesse Greaves and David Lujan stopped to get some food and coffee, but had bigger plans.

“We’re heading all the way to (University of Colorado Boulder’s) east campus,” Lujan said. “Or, we’re going to try.”

“I blasted my back pretty good,” Murphy said.

But even cold and bruised, the three once again heeded the call of the water, living that tube life.

“This should be a national holiday,” Greaves said.