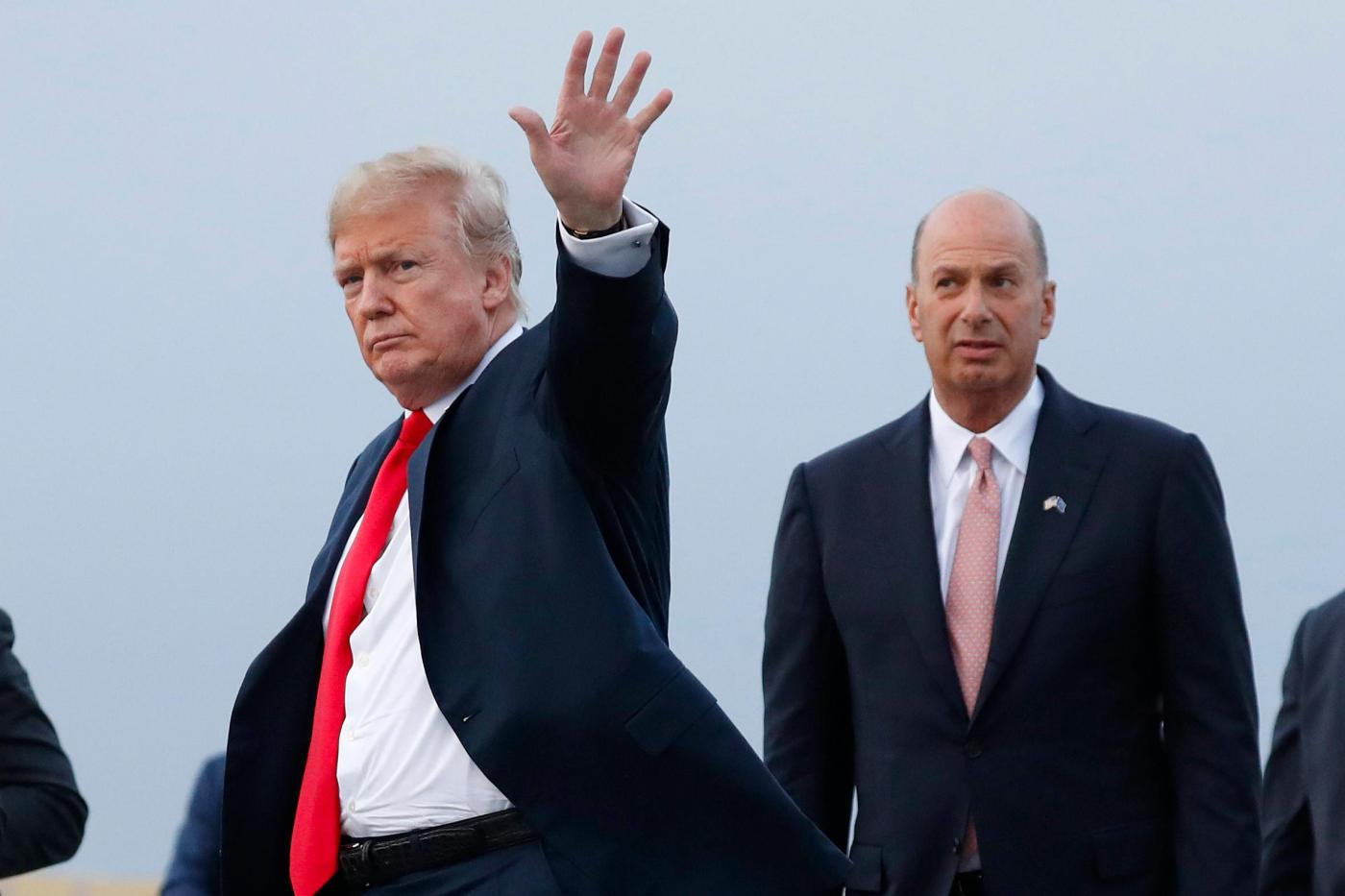 “Ambassador Sondland is profoundly disappointed that he will not be able to testify,” said a statement from the envoy’s attorney, Robert Luskin. “Ambassador Sondland traveled to Washington from Brussels in order to prepare for his testimony and to be available to answer the Committee’s questions.”

Trump gave his version of why the envoy was blocked, tweeting that “I would love to send Ambassador Sondland” to testify, “but unfortunately he would be testifying before a totally compromised kangaroo court.”

At the Capitol, intelligence committee chairman Adam Schiff, D-Burbank, said the barring of Sondland’s appearance was “additional strong evidence” of obstruction of Congress, which could become an article of impeachment.

A whistleblower’s complaint and text messages released by another envoy portray Sondland as a potentially important witness to allegations that the Republican president sought to dig up dirt on a Democratic rival in the name of foreign policy. On Tuesday, Sondland had been scheduled to face questions about the episode, the second time in as many weeks that lawmakers would have privately interviewed an ambassador about the president’s push to get Ukraine to investigate Democrat Joe Biden ahead of the 2020 presidential election.

Text messages released by House Democrats show Sondland, the U.S. ambassador to the European Union, working with another of Trump’s envoys to get Ukraine to agree to investigate any potential interference in the 2016 U.S. election and also probe the energy company that appointed Biden’s son Hunter to its board. In exchange, the American officials dangled the offer of a Washington meeting with Trump for Ukraine’s new president, Volodymyr Zelenskiy. There has been no evidence of wrongdoing by Biden or his son.

Among the most striking messages was one in which Sondland sought to reassure a third diplomat that their actions were appropriate.

“The President has been crystal clear no quid pro quo’s of any kind. The President is trying to evaluate whether Ukraine is truly going to adopt the transparency and reforms that President Zelenskiy promise during his campaign,” he wrote, adding, “I suggest we stop the back and forth by text.”

It was revealed Tuesday that Sondland sent that message after calling Trump directly and being told there was no promised trade of favors. Sondland reached out to Trump because he was concerned by the alarms raised by the other ambassador, William “Bill” Taylor, the charge d’affaires at the U.S. Embassy in Ukraine, according to a person familiar with the exchange. The person insisted on anonymity to discuss the conversation.

Until last week, Sondland was far better known in his home state of Washington than in the nation’s capital, where he finds himself embroiled in an impeachment inquiry centered on a July 25 call between Trump and the Ukrainian president. But even if not accustomed to the global spotlight, the wealthy hotelier, philanthropist and contributor to political campaigns has long been comfortable around the well-connected on both sides of the political aisle.

The messages also show Sondland trying to reassure a third diplomat that their actions were appropriate, but that they should take precautions by limiting their text messages.

Like the president who picked him, Sondland cut an unconventional path to becoming a Washington power broker.

The son of German immigrants who fled the Nazis in the 1930s and later founded their own dry cleaning business in Seattle, Sondland is best known in the Pacific Northwest as the founder of the Provenance Hotels chain. He and his wife also established a foundation that’s bestowed millions of dollars on health care and regional arts and culture programs.

While Sondland emerges in the texts as in sync with the president’s wishes, he hasn’t always been supportive of Trump himself. He took a meandering path to that support, contributing over the years to eventual Trump adversaries including Mitt Romney and John McCain. In 2015, he donated thousands of dollars to a super PAC associated with Jeb Bush, Trump’s Republican primary opponent.

But as Trump emerged as the Republican nominee, four limited liability corporations controlled by Sondland gave the Trump inaugural at least $1 million, according to Federal Election Commission records and business filings in Washington state and Oregon.

He still had concerns, though. In August 2016, Sondland and another hotelier, Bashar Wali, refused to take part in a fundraiser for Trump because of his criticism of the Muslim parents of an American soldier killed in combat, The Willamette Week reported. A spokeswoman for his hotel chain told the publication at the time that their names were added without their approval to a draft invitation for the event, and that neither would be participating.

“Mr. Trump’s statements have made it clear that his positions do not align with their personal beliefs and values,” Buska told the publication. “Neither of them will be hosting or attending any fundraisers for the Trump campaign in Seattle or Portland.” Buska did not return a call Monday from The Associated Press.

Nierenberg, who recalled Sondland working with him to promote Bush’s presidential campaign, said he was perplexed to learn that Sondland had contributed to Trump’s inaugural committee but suspected that it might have had something to do with an ambition to get an ambassadorship.

“I’m profoundly troubled by something that is a lot bigger than Gordon’s text messages,” he said. “People who try to help the president wind up being thrown under the bus and soiled by their association with a person who is so profoundly narcissistic and ungrateful. Many good people have been hurt by their association with him. I’m saddened to see this happening to Gordon, as it happened to so many people before him.”

In his role as the Trump administration’s representative to the EU, Sondland has articulated the president’s agenda through forthright, occasionally abrasive statements.

He has bristled at what he claims is the slow pace of the EU’s executive arm, the European Commission, in trade talks. He’s criticized the EU’s stance on the Iran nuclear agreement and even waded into the chaos surrounding Brexit, saying Britain has “decided to leave, and we want them to leave in a way that they are free to do business with the United States.”

Len Bergstein, a Portland, Oregon, political consultant who had worked with Sondland, described him as “a self-made man who had gotten where he was by putting together complex deals.” But he said he remained puzzled about how and why Sondland became entangled in the Ukraine matter.

“The arc of Gordon’s story is of a guy who’s tremendously successful in everything he touches, reaches for the stars here, and gets in the middle of a little bit of a scandal,” Bergstein said.