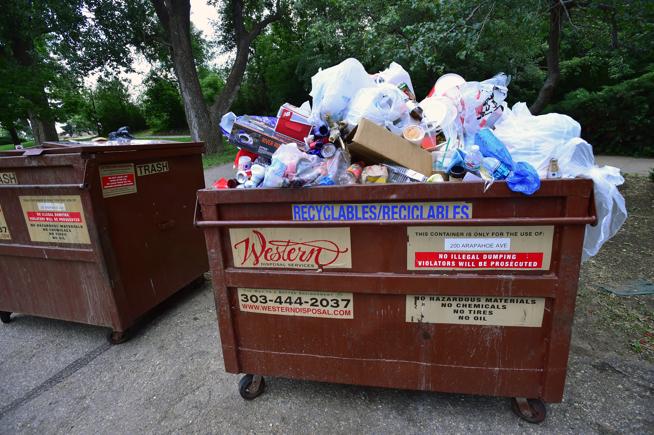 Councilmember Cindy Carlisle was not at Eben G. Fine park last year on the Fourth of July, but she saw the aftermath the following day.

The park, a popular destination for those looking to celebrate the holiday, drew a crowd. Up and down Boulder Creek, which runs through the park, people packed the banks and lounged in the water. Beer pong games and general alcohol consumption were witnessed, though possession of alcohol, without a permit, is not allowed.

Carlisle lives close by on Fourth and Spruce streets and frequently walks by the park. On July 5 last year, she described seeing trash trucks cleaning up heaps of trash. The refuse, however, was just one concern Carlisle felt was raised in the wake of the Fourth of July festivities in the park.

“It’s not the celebration. It’s great people celebrate,” Carlisle said. “It’s the safety issues that have come up surrounding too many in too small a spot.”

Carlisle said she worried about people’s safety in light of the alcohol consumption witnessed, as well as the parking situation, which saw a number of people parking along busy roadsides and darting across traffic to get to the park.

To address some of these issues, parks and public safety officials said last week they would be stepping up their efforts to keep the park clean and family friendly this year as Fourth of July celebrations commence.

Denise White, a communications specialist for Boulder Parks and Recreation and Shannon Aulabaugh , public information officer for the Boulder police and fire departments, said there will be more police officers and city parks employees at the the park. In addition, there will be designated parking. Those who park in restricted areas may receive a ticket or have their vehicle towed.

Officials also are taking precautions because of to high water in Boulder Creek. On Wednesday, Boulder County Sheriff Joe Pelle and Boulder Police Chief Greg Testa issued a tubing ban on Boulder Creek, effective through noon Monday. A ban is typically enacted when the river reaches 700 cubic feet per second. According to Meghan Wilson, a communications person for the city of Boulder , the water has been fluctuating between 500 and 650 cubic feet per second. Those who violate the ban could be subject to a $50 fine and a Class Two petty offense.

With guidelines in place pertaining both to safety and keeping the park “neighborly,” White and Aulabaugh hope to see improvements this year.

“We are hoping to remind people prior to the holiday that we want everybody to have a good time and to feel welcomed in the parks,” White said. “Respect the park rules to help that environment be fostered. We are not trying to get everyone trouble. We are trying to make people aware of changes to plan accordingly.”

To help with parking concerns, Arapahoe Avenue at the east end of the park, or about the 300 block, to Boulder Canyon Drive will be closed July 4. Only local traffic and emergency vehicles will be allowed beyond the closure, they said. They added that parking within the vicinity will be limited to designated areas. No additional vehicles will be permitted access, once these parking spaces are at capacity. Signs will notify drivers that parking along the shoulder of Boulder Canyon Drive in the city is prohibited.

“This year we are trying to cut down on the parking,” White said. “That helps with the crowd control as well as (employee) access to the park.”

Carlisle said she brought the issue to the attention of fellow city leaders during a council agenda meeting soon after July Fourth. She said Boulder Police Chief Testa and the city manager were present during this conversation.

“They were both really responsive to it,” Carlisle said. “I didn’t need to take council action. This was a no-brainer. They indicated that they would do what they could to make it safer.”

For her part, Aulabaugh emphasized that in addition to ramping up efforts, she hopes to make the rules clear so that residents as well as those from out of town are aware of expectations. She joined White in reminding people of a few basic guidelines to follow this year:

After hearing about park and police officials’ efforts to curb similar park behavior this year, Carlisle said she felt at ease that the efforts would make a difference.

“I hope that everyone has a good and safe Fourth of July,” Carlisle said. “The park is a great park — it’s just, people need to pay attention and clean up after themselves and be respectful of others.”